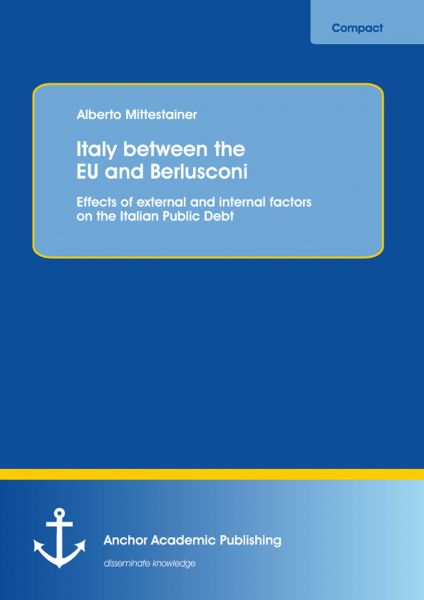 Von Alberto Mittestainer
The aim of this study is to investigate whether the reduction of the Italian public debt between 1994 and 2004 and the increase after 2004 is due to internal or external factors. Given the current debt crisis in Europe, this is a fundamental question since it may demonstrate if Italy - and states in general - are able to handle their fiscal problem by themselves or if they need external help. The evidence, in the form of a detailed analysis of parliamentary debates and newspaper articles, will show that Italy was able to reduce the public debt only when pressured from outside and that the external constraints of the European Union in the form of Maastricht Parameters greatly... alles anzeigen expand_more

The aim of this study is to investigate whether the reduction of the Italian public debt between 1994 and 2004 and the increase after 2004 is due to internal or external factors. Given the current debt crisis in Europe, this is a fundamental question since it may demonstrate if Italy - and states in general - are able to handle their fiscal problem by themselves or if they need external help.

The evidence, in the form of a detailed analysis of parliamentary debates and newspaper articles, will show that Italy was able to reduce the public debt only when pressured from outside and that the external constraints of the European Union in the form of Maastricht Parameters greatly impacted the level of Italian debt. Once Italy complied with them and became a member of the European Union, the effect disappeared and the Italian public debt started increasing again. Internal factors do not appear to have played a role. In particular, the qualitative study of parliamentary debates on the budget shows that the level of polarization and the role of veto players caused by it have remained constant and therefore can’t be used to explain the variation in public debt.

There is a vast literature that tries to explain why countries have huge public debt while others are able to balance their budgets. Economic theories, however, are not sufficient to explain why some states run bigger deficit than others (Technical Commission for Public Finance, 2007, 18; Alesina, Perrotti, 1995).

Therefore, theories that consider both economic and political factors of why states run deficit are particularly useful. Three main theories are discussed and explained: opportunistic political business cycle, partisan political business cycle and that relying on variables such as fragmentation and polarization. It will be observed, however, that the first two theories do not apply to the case observed. Given the long period of reduction of the debt, the two theories can’t be applied since there is no reason why politicians did not adopt opportunistic behaviour during those years and both leftists and rightist governments were involved in the reduction of the debt. Therefore there will be only a short review of them.

Yet, to the list of possible theories that can help explain why countries may have bigger public debt, those ones that account for the role of external factors must also be taken into consideration. In particular, the European Union may have played a role in shaping Italy and other European countries’ policies.

A possible explanation of why states run big deficits relies on the opportunistic behaviour of politicians. The model of opportunism political business cycle argues that a politician will increase expenditures before the election in order to gain support from voters (Nordhaus, 1975; Tufte, 1978).

This first wave of literature of opportunistic behaviour did not receive much support until later research. Scholars found mixed empirical support and were critical of the fact that voters were considered irrational (Alesina and Roubini, 1992, 3; Drazen, 2000, 96; Franzese, 2002, 380-381). As a consequence, a second wave of research elaborated on the opportunistic political business cycle (Alesina, 1988, 16). The aim of the scholars was to create a model where the voters are rational but can still fail to choose the best politicians due to other reasons such as, for example, lack of perfect information (see for example Rogoff-Sibert 1988, Cuckierman-Meltzer 1986).

This theory argues that political parties have different goals and different priorities that they pursue while in office (Drazen, 2000, 88). Hibbs (1977, 1977) argues that left-wing parties have as priorities full employment and equalization of income distribution while right wing parties pursue price stability and, at a lower extent, balance of payments equilibrium. Therefore, leftist parties should produce larger debt than rightists. Similarly to the opportunist model, scholars have introduced rational expectations (Alesina, 1988).

Scholars have tested these models and have found that the partisan effects are not strong (Mink and de Haan, 2006; Alesina, Roubini, Cohen, 1999) or absent (Heckelman, 2006; Faust and Irons, 1999). In order to explain why sometimes there can be no partisan effects, scholars claimed that it may be because the party is sure to win (Fowler, 2006, 100), or because political parties may have changed policy preferences (Mulas-Granados, 2003, 36) or because there are other important factors that prevail such as the number of veto players (Perotti and Kontopoulos, 2002, 193-194).

Another strand of the literature focuses on the attributes of the democratic political institutions and how they affect the level of public debt. These attributes can be fragmentation, government instability and polarization (Grilli et al., 1991, 349). These factors produce coordination problems and common pool dilemma problems within the government such as spending ministers (Hallerberg, unpublished, 3), political parties and other decisions makers such as decentralized units, and veto players (Alt, Lassen, 2005, 1405) that increase the chances that a government runs a bigger debt. Coordination problems refers to the increasing the number of actors involved in the decision making process which makes it, therefore, harder to get to an agreement. Common pool dilemma refers to the increasing number of actors with different goals and objectives. Thus, there are more chances for the approval of decisions that do not favour the whole community (ibid.).

In more detail, greater instability affects governments in terms of shortening the time horizon. Governments have, therefore, incentives to pursue the policy they want, disregarding future consequences (Grilli et al., 1991, 349). Polarization means the level of disagreement among policy makers. If it harder to get to a decision, there are more possibilities that a government is unable to adopt policies to reduce the debt (Eslava, 2011, 648). Fragmentation measures how many different actors are involved in the decision process. Different actors have different interests; they may try to adopt policies that favour their constituencies but share the costs on the whole country (Roubini et al, 1989, 126; Alesina and Perotti, 1996, 16). The first two conditions stress political instability as a key to explain variation of the public debt. Fragmentation, instead, regards government weakness (Grilli et al., 1991, 11).

weniger anzeigen expand_less
Weiterführende Links zu "Italy between the EU and Berlusconi: Effects of external and internal factors on the Italian Public"