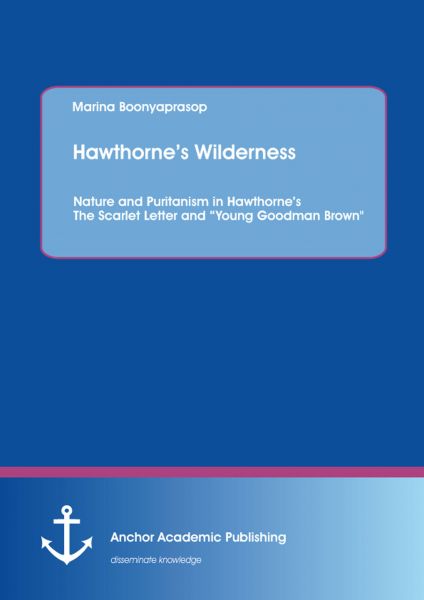 Von Marina Boonyaprasop
Nathaniel Hawthorne is one of America’s most noted and highly praised writers, and a key figure in US literature. Although, he struggled to become an acknowledged author for most parts of his life, his work “stands in the limelight of the American literary consciousness” (Graham 5). For he is a direct descendant of Massachusetts Bay colonists in the Puritan era of the 17th and 18th century, New England served as a lifelong preoccupation for Hawthorne, and inspired many of his best-known stories. Hence, in order to understand the author and his work, it is crucial to apprehend the historical background from which his stories arose. The awareness of the Puritan... alles anzeigen expand_more

Nathaniel Hawthorne is one of America’s most noted and highly praised writers, and a key figure in US literature. Although, he struggled to become an acknowledged author for most parts of his life, his work “stands in the limelight of the American literary consciousness” (Graham 5).

For he is a direct descendant of Massachusetts Bay colonists in the Puritan era of the 17th and 18th century, New England served as a lifelong preoccupation for Hawthorne, and inspired many of his best-known stories. Hence, in order to understand the author and his work, it is crucial to apprehend the historical background from which his stories arose. The awareness of the Puritan legacy in Hawthorne’s time, and their Calvinist beliefs which contributed to the establishment of American identity, serve as a basis for fathoming the intention behind Hawthorne’s writings. His forefathers’ concept of wilderness became an important part of their religious life, and in many of Hawthorne’s tales, nature can be perceived as an active agent for the plot and the moral message. Therefore, it is indispensable to consider the development behind the Puritan perception, as well as the prevailing opinion on nature during the writer’s lifetime.

After the historical background has been depicted, the author himself is focused. His ambiguous character and non-persistent lifestyle are the source of many themes which can be retrieved from his works. Thus, understanding the man behind the stories is necessary in order to analyze the tales themselves. Seclusion, nature, and Puritanism are constantly recurring topics in the author’s life and work. To become familiar with Hawthorne’s relation to nature, his ancestors, and religion, it is essential to understand the vast amount of symbols his stories.

His stories will be brought into focus, and will be analyzed on the basis of the historical and biographical facts, and further, his particular style and purpose will be taken into consideration.The second part of this book analyzes two of the author’s most eminent and esteemed works, namely ‘Young Goodman Brown’ and ‘The Scarlet Letter’ in terms of nature symbolism and the underlying moral intention. Further, it is examined to which extent the images correspond to the formerly explained historical facts, and Hawthorne’s emphasized characteristic features.

The comparison of the two works focuses on the didactic purpose for in all of his works, Hawthorne’s aim was to give a lesson. Thus, it will […]

As the preceding chapter has already shown, the American mindset towards nature was in a ‘state of transition’ (Nash 66) during Hawthorne’s lifetime. While Puritans and various generations before them had regarded nature as something wild, heathen, and frightful, Hawthorne’s romantic and transcendental contemporaries vindicated a considerably more positive or even sacred image of wilderness. As both ‘Young Goodman Brown’ and The Scarlet Letter are partly set in the midst of nature, the depiction of Hawthorne’s standpoint regarding the current era of change is indispensable in order to understand both works.

His biography has already revealed that Hawthorne frequently turned to nature. In the midst of the wilderness, he was able to find solitude, harmony, and inspiration. His short story ‘Footprints on the Sea Shore’ could be regarded as the author’s homage to the natural world. Standing alone, it could reveal all there is to say about Hawthorne’s attitude towards the vast landscape.

His affection for nature is closely related to his love of seclusion, as the vast countryside serves as his personal retreat from society. The author knows that ‘[i]n a forest, solitude would be life; in a city, it is death’ (Hawthorne, ‘The New Adam and Eve’ 8). Additionally, he remarks that ‘the forest and the ocean summon [him] forth from the haunts of men’ (‘Footprints’ 253). Therefore, it can be assumed that he enjoyed nature more than the community with other men. His days outside remind him of the fact that ‘[he] shall walk among men kindly and as a brother . . . But yet shall not melt into the indistinguishable mass of human kind’ (‘Footprints’ 266). The author hence turned to the vast uninhibited land whenever he wanted to free himself from society, a habit quite equal to what Emerson described in Nature. Although Hawthorne was not a declared Transcendentalist, he still experienced a mentally cleansing effect within the realms of nature. Opposing his solitary behavior within human society, the great outdoors allowed him to reveal his innermost self and to be social in some way: ‘[T]he great sea has been my companion, and the little sea birds my friends, and the wind has told me his secrets, and airy shapes have flitted around me in my hermitage’ (‘Footprints’ 265). Here, he found ‘magic’ and ‘beauty’ (‘Footprints’ 262-63). He admired the serenity and harmony within this lonesome place and felt the urgent need to be ‘in tune with nature’ (Wagenknecht 66) as it offered him the happiness and safety, society was unable to provide.

In ‘Footsteps on the Sea Shore,’ Hawthorne also depicts the inspirational character of his wanderings. He felt connected with the countryside, which provided him with the space needed to develop his ideas and thoughts, which would later be committed to his stories: His ‘musings [have] melted into ist rocky walls and sandy floor, and made them a portion of [him]self’ (261). The secureness he experienced among natural surroundings quickened his imagination and thoughts. This inspiring effect of the landscape remote from society was later described by his son Julian: ‘[F]or Hawthorne there was nothing but the night and the day, the sunshine and the rain, the changes of the seasons, the leaves of the forest and the waves of the sea . . . To quicken and nourish his imagination’ (‘The Salem of Hawthorne’ 12).

The indispensable role nature played in Hawthorne’s life is also revealed in his notebooks. The greatest amount of lines dedicated to his observation of and pleasure in the beauty of nature disclose the fact that he did not simply enjoy being outside, but actually paid close attention to his natural surroundings (cf. Hawthorne, The American Note-Books). While these descriptions of nature are rather realistic, Hawthorne transformed his observations into fiction during the process of writing. In his poem ‘Hawthorne,’ even Longfellow acknowledges the ‘tender undertone’ (289) of the natural images, which can be found in all of Hawthorne’s tales and novels. In many of his fictional works, such as ‘Young Goodman Brown’ or The Scarlet Letter, nature descriptions occupy a considerable amount of space. Thus they might be regarded as additional characters or agents which enhance another figure’s personality. In both stories, they are essential to the plot and the moral lesson within.

While he dedicated much of his private and literary life to nature, also his funeral seemed to have been embroidered by the exquisiteness of nature. In his moving obituary, O.W. Holmes called his friend ‘a lover of nature’ (194). It seemed to him that on Hawthorne’s burial day, the entire flora was displaying ist beauty ‘as if Nature herself were sighing for our loss’ (194). These memories, filled with numerous references to flowers and the sun, exemplify Hawthorne’s striking affection for the vast countryside once more.

Nevertheless, despite the joyful and inspirational experiences in the realms of nature, Hawthorne was not able to free himself from the constant engagement with his Puritan ancestors. ‘Sometimes,’ he admits, ‘the Past comes back’ (‘Footprints’ 263). In these moments he wished ‘that [his] hiding-place were lonelier, so that the past might not find [him]!’ (‘Footprints’ 263). This oppressive quote is striking when keeping in mind that the remaining story is – besides Hawthorne’s slight criticism of society – rather jovially and light. It serves as an example for the author’s permanent mental burden, which the following section will scrutinize in further detail.

Hawthorne’s lifelong preoccupation with his Puritan ancestors has already been pointed out in the course of this paper. In order to understand many of his historical stories, which are set in 17th and 18th century New England, the author’s relation towards Puritanism has to be regarded. Since scholars have argued if the author was Calvinist or not, I will examine his religious identity in the following section in order to be able to analyze and comprehend the purpose of and intent behind Hawthorne’s writings.