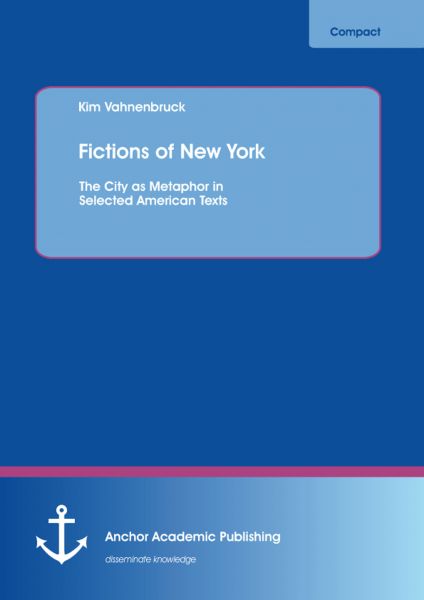 Von Kim Vahnenbruck
‘New York City as Metaphor in Selected American Texts’ tries to capture the picture and meaning of an ever-changing city which has casted and still casts a spell over people all around the world. An uncountable number of authors have dedicated their works to New York City because of their fascination of its diversity and constant change that promises its dwellers a life in wealth and freedom. Surprisingly, all novels that have been analyzed reveal New York as the complete opposite of the American Dream that everyone expects when arriving on Ellis Island. The protagonists have to realize that their dreams will never become fulfilled and, consequently, become... alles anzeigen expand_more

‘New York City as Metaphor in Selected American Texts’ tries to capture the picture and meaning of an ever-changing city which has casted and still casts a spell over people all around the world.

An uncountable number of authors have dedicated their works to New York City because of their fascination of its diversity and constant change that promises its dwellers a life in wealth and freedom.

Surprisingly, all novels that have been analyzed reveal New York as the complete opposite of the American Dream that everyone expects when arriving on Ellis Island. The protagonists have to realize that their dreams will never become fulfilled and, consequently, become disillusioned and corrupted by their unhealthy environment.

John Dos Passos describes a City that becomes a modern Babylon; it is fragmented and on its way to greed, capitalism and corruption. The New York of Stephen Crane’s Maggie Johnson and Edith Wharton’s Lily Bart is like a gigantic deterministic cage that denies every attempt of escape. Moreover, the metaphysical novel ‘City of Glass’ by Paul Auster does not show any sign of the promised life in wealth and freedom, but rather a city that is split into pieces, ruled by chance and misunderstandings.

The city literally dehumanizes its inhabitants as they are dazzled by its addictive quality.

Concrete jungle where dreams are made of,

There’s nothing you can’t do,

these streets will make you feel brand new,

the lights will inspire you,

These lines from the song Empire State of Mind (2009) by the famous American rapper, record producer and entrepreneur Jay-Z, who was born in Brooklyn, New York, reveal the challenge of capturing the City of New York in words or text. New York City is on the one hand celebrated as the place ,where dreams are made of’, whose ,streets will make you feel brand new’ and whose ,lights will inspire you’, but on the other hand also as a ,[c]oncrete jungle’.

The contrasting, yet at the same time very tempting ideas of the ’City that Never Sleeps’ make it not only the most popular city in the United States, but also the most ,dynamic, varied and perplexing in the world’ (Gates ix). Robert A. Gates further describes the challenge for the writer, singer or songwriter: ,There are no standards [one] can grasp; no guidelines [one] can follow’, because [t]he City presents no standard language, philosophy, or neighborhood that can be labelled as typically New York’ (ix).

In order to understand the city and its influences at least to some extent, it might be useful to talk about the name ’New York’ and the events in history that helped to make it the most important and most famous city in the world.

When people talk about New York, the City of New York is referred to and more precisely the most densely populated borough of Manhattan. In 1898, the Bronx, Brooklyn, Manhattan, Queens and Staten Island were consolidated to the City of New York, which is part of the state of New York. Therefore, New York and New York City are almost always used synonymously and refer to the same part of the city: Manhattan. It can be subdivided into Lower, Midtown, and Uptown regions. Westbound the Hudson River divides the city from New Jersey and East Manhattan is separated from Long Island by the East River. Other frequently used nicknames are ’The Big Apple’ , ’Gotham’ , ’Center of the Universe’, ’The City that Never Sleeps’ and ’The Capital of the World’.

The city’s history describes quite effectively why especially New York has inspired so much great writing and became famous for its literary variety and sheer volume. Phillip Lopate, in Writing New York: A Literary Anthology, summarizes the city’s past as follows:

From the start, the place was fast, boisterous, crowded, dirty, secular, and on the make. It began as a cosmopolitan, international port, a walking city with a vital street life and a housing shortage, and stayed that way. The more the metropolis grew, the more it attracted writers (Lopate XVII).

Yet, two incidents at the beginning of the nineteenth century helped New York to strengthen its identity and personality as a metropolis. One was the War of 1812, that changed America’s self-opinion because then it could consider itself both politically and psychologically independent from Great Britain. This feeling also encouraged New York to ,untie [its] provincial apron stings with British cities ,(Gates x). The second event was the completion of the Erie Canal during the early 1820s, which connected Lake Erie further west with New York and established it as the new and busiest mercantile center in the United States. ,Post-Civil War prosperity and the opening of the West had encouraged massive waves of immigrants to seek success in the new world, and the first port-of-call for most was New York’ (x). In the following years, the number of people immigrating to the United States and especially New York increased explosively .

A result of the rise of the city’s population was the establishment of ethnic neighborhoods and consequently also the rise of the first tenement slums, because many failed to pursue their dream of success in the new world. Poverty became a major aspect and created a polarized city ,with clearly defined borders between the lifestyles and habitations of the rich and poor’ (x).

Nevertheless, New York managed to save itself, because of its adaptability to new times and circumstances. Exactly this is represented in the great volume of different literature about the city of New York. For each author writing about the city, New York stands for something else. Consequently, making a proper choice with reference as to what novels should be analyzed was quite difficult. It serves as a metaphor and can be interpreted in various ways depending on the intention of writing, the author’s experiences with the city and the living conditions of the characters within the story, because ,the city often is part of the journey in the development of a protagonist [...]’ (Sauter 37).

Therefore, this thesis wants to analyze how New York City is depicted and interpreted as a metaphor in selected American texts.

The first chapter (2 The City as a Metaphor) explains what a metaphor is, how the city has become one and serves as a basis for further analysis of the main part. The main part then gives different images of the city, starting with the novel by John Dos Passos which gives a panoramic overview of New York City between the 1890s and 1920s (chapter 3.1.1). In a second step, this work goes deeper into the city by analyzing the polarized neighborhoods of Edith Wharton and Stephen Crane (chapter 3.2.1) and their meaning for the protagonists. A third chapter is dedicated to Paul Auster who gives a very modern, metaphysical view on the city (chapter 3.3.1).

The thesis is summarized in form of the last chapter that tries to evaluate if the topography of New York plays an important role for the different meanings of the city.