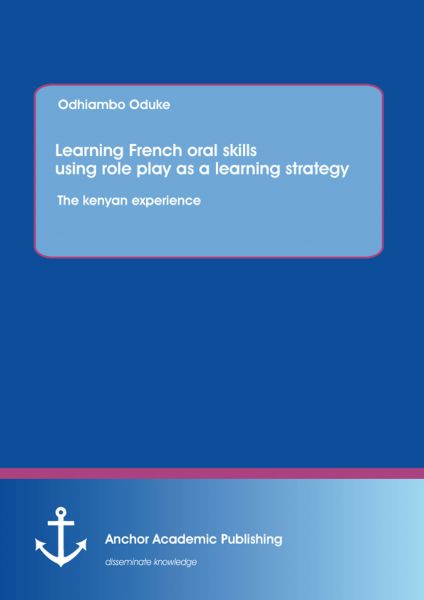 Von Odhiambo Oduke
Role play and foreign language learning helps the learners to develop speaking skills within defined social contexts. Languages are always spoken within certain defined spacio-social context. The learning of French as a foreign language in Kenya takes cognizance that oral skills are important to facilitate competent communication in any given language. The Kenyan reality of learning oral French skills within a learning set-up in Kenyan secondary schools is well presented in this text. The salient challenges are also highlighted since language learning is normally not a smooth sail for the learner and for the teacher who plays a pivotal facilitation role in guiding the learner to... alles anzeigen expand_more

Role play and foreign language learning helps the learners to develop speaking skills within defined social contexts. Languages are always spoken within certain defined spacio-social context. The learning of French as a foreign language in Kenya takes cognizance that oral skills are important to facilitate competent communication in any given language. The Kenyan reality of learning oral French skills within a learning set-up in Kenyan secondary schools is well presented in this text. The salient challenges are also highlighted since language learning is normally not a smooth sail for the learner and for the teacher who plays a pivotal facilitation role in guiding the learner to imbibe the vital communicative skills in the language that is being taught. On the whole role play is not just a language learning activity; it is an activity that provides impetus which propels human development in ist entire gamut of activities. A conspicuous hint on the importance of role play in our daily lives is also presented in this text with some examples well presented and cited in this write-up. Stephen Kraschen’s Montior Model on language acquisition and the Grounded Theory which helps to interprete social research findings have been used to analyze the data which was derived from the inquiry done in the Kenyan secondary schools. The classical importance of role play and simulation in the learning process has been well underscored in this particular text.

Role play has been around as a learning tool for a long time and it has always been in vogue, it is practical and feasible as teaching tool for oral skills.

Role-play as a mode of language learning will never be an out-moded concept. In fact role-play is being used in some of the management studies for the decision-makers who give executive directives to learn how to make rational and effective decisions. Through being exposed to hypothetical and realistic scenarios in the world of work where the directors and chief executive officers hold key roles in providing leadership in these organizations.

Pseudo decision making situations are improvised for them to solve using the management principles and acumen which tests their ability on how they make executive decisions.

The fulcrum of these management activities rely on oral language which is used in communication. The verbal expression is essential. I would wish to corroborate this fact by referring to a definition on role play by Cohen (1988). I would wish to cite this definition verbatim:

That Role play is ‘participation in simulated social situations that are intended to throw light upon role/rule contexts governing ‘real’ life social episodes.’

Herein I would wish to add professional episodes within the work space or environment.

I have deviated a little bit from the actual classroom learning situation to refer to a professional context to emphasize on the genuine importance of role-play and learning per se.

Role-play is not just a language learning activity. It is an activity which provides impetus that perpetuates human development in ist entire gamut of activities.

Sometime in the year 2009, I did work as an interpreter (French-English) during the Bolléro International meeting which was to have an annual general meeting with all ist regional managers across the world. The Chief Executive Officer of Bolléro International insisted on rehearsing his speech and fusing in some subtle mannerisms before the actual presentation of his speech to the general plenary. He took about three hours in the evening from 17hrs to 19hrs in the evening to rehearse the speech which he was to present the next day.

He insisted that he wanted to communicate effectively to the regional managers. This was another instance of role play being used to perfect effective communication. Why should a Chief Executive Officer who actually is the top most and key decision maker undergo simulation and rehearsal to present a speech? His objective was to deliver a speech with a serious punch which was to impact positively upon the regional managers to make them pro-active.

As I prepared and gathered data for this text, I encountered two instances of role play on the TV5Monde - francophone international television channel. The first one was a reputed fashion and design company which wished to recruit two workers to in their fashion and design company. They had about 150 applicants. They opted to use role-play to select the best two candidates.

Subtle challenges were placed in their working spaces to test their patience, resilience and how they spontaneously reacted in different situations and circumstances. Finally, the ones who displayed lots of resilience, courage and creativity above all common sense were the ones who were hired. Role play is not just a linguistic tool. It is a ‘tool’ that can also be used in an interviewing process as the aforementioned one.

On the same television channel, I watched Aldi Suisse documentary. Aldi Suisse is an organization which is reputed in making the minute cameras which the detectives, sleuths and journalists and other intelligent organs use to gather data and vital information. Role play is used to test the efficiency and efficacy of the cameras. ‘Improvised-cum-fake’ clients get into the spaces where these cameras have been fixed and later on they end up giving reports on how they have been ‘mishandled’ to actually test if it is actually true that they were mistreated.

The investigation finally resorts into assessing the data which was captured by the micro-camera to ascertain the veracity of these ‘fake clients’. The objective of the role play is to ensure that the clients who source these cameras eventually get value for their money and credible service wherever they have been installed or wherever they are being used. This is an instance of role-play to interpret how it is possible to be genuine, honest and scrupulous.

Role play is nowadays used to train persons who are interested in studying auditing to verify if processes laid down within an organization are being adhered to or not. Kenya Bureau of Standards (KEBS) uses role play to train auditors. This makes them to simulate situations which are akin to the reality which they will encounter on the ground.

Role play involves speech. Speech in ist micro definition is a combination of phonemes which graduate into morphemes and the end result is that meaning is generated when morphemes form meaningful letters (or words when scripted).The basic purpose of speech is to communicate orally. The meaningful sounds is what forms oral discourse. This is a reality that qualifies the existence of any language used by humanity world over. The essence of communication is facilitated by the presence and existence of a language.

Linguistic expression is not just uttering or reeling out the vocabulary and grammar. There are intrinsic paralinguistic features (suprasegmentals) which are an indispensable ingredient in the language expression to create a complete enactment of communication in any given language Role -play as a technique of language learning is all encompassing and these paralinguistic features are always part and parcel of the role play process.

The universality of the role-play technique proves that it is a unique teaching tool which can be used by all the learners who have developed interest to study an extra language to enrich their linguistic menu.

Role play, being an activity of experiential learning (Joyce et al., 1992, Van Ments, 1990; Kolb, (1984);Wolsk, 1975) brings the real world into the language learning space and , transforming the artificial , sterile and static atmosphere to be live and interesting. The encounter and experience of pseudo real-life situations in role play provide insights into perpetual and persistent challenges, besides building upon language proficiency through naturalistic interaction.

Students can discover the ‘how’ of learning is as important as the ‘what.’ The mere observation of the phenomenon is inadequate as follow-ups such as testing the dynamics of the reality are equally important, as suggested by Sharan and Sharan (1976):

‘… role playing can be used effectively to improve skills needed for the language process (i.e. how students work together) rather than simply being a technique for exploring content.’

I would wish to discuss Kraschen’s Monitor Model which also entails the input hypothesis and how this model is actually in tandem with role play and language learning. Thereafter I shall merge the Monitor Model with the Grounded theory as my conceptual framework in this particular text.

Odhiambo James Oduke , holds a Diploma in Education (French, English, Siriba Teachers’ College , Currently Maseno University(Kenya), BA in Language sciences majoring in French as a foreign language . MA in French as a foreign language. Masters 2 (Maîtrise 2) majoring in general linguistics, language research and Francophone studies. The three degrees are from l’université de Rouen- France .His doctoral dissertation focuses on Role play and foreign language learning. He has taught French and English at Lwak Girls (1988- 2005), Booker Academy (2006-2010) in Kenya. Since 2010 to date he is a lecturer at Maseno University in the Department of French and other Foreign languages. He also teaches performing arts in the Department of Music and Theatre Studies. He has also co-authored course books for teaching of French in Kenyan secondary schools. The notable ones being ‘Parlons Français’ series published by Kenya Institute of Education, ‘Entre Copains’ series , ‘K.C.S.E Peak Revision - French’ published by East African Educational Publishers. He is a national adjudicator and facilitator of performing arts and elocution in the schools Drama Festival and Music festival in Kenya. He is an alumnus of Salzburg International Seminar- Austria (session 366 Urban Youth).