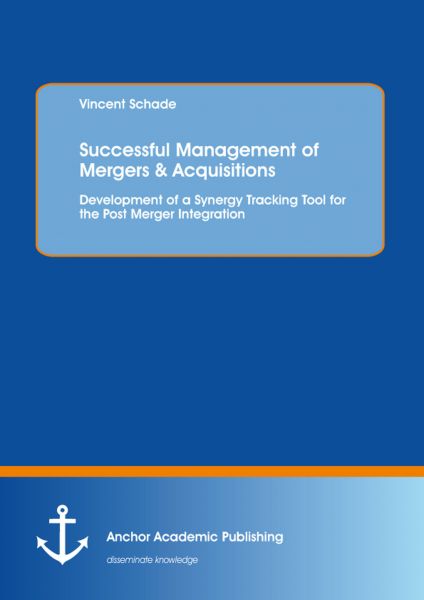 Von Vincent Schade
In Business Development, Mergers & Acquisitions (M&A) have become an increasingly attractive growth opportunity among companies over a long period of time. Nowadays, there is hardly a day where current developments of ongoing M&A transactions or speculations about presumed M&A deals cannot be followed in the daily press.It is proved that a huge number of M&A did not deliver on their promises. The majority of failed M&A are a result of mismanagement during the Post Merger Integration (PMI) when processes have to be adjusted, personnel need to be teamed up and corporate cultures have to be reconciled.This study deals predominantly with aspects of synergy... alles anzeigen expand_more

In Business Development, Mergers & Acquisitions (M&A) have become an increasingly attractive growth opportunity among companies over a long period of time. Nowadays, there is hardly a day where current developments of ongoing M&A transactions or speculations about presumed M&A deals cannot be followed in the daily press.It is proved that a huge number of M&A did not deliver on their promises. The majority of failed M&A are a result of mismanagement during the Post Merger Integration (PMI) when processes have to be adjusted, personnel need to be teamed up and corporate cultures have to be reconciled.This study deals predominantly with aspects of synergy management whereby the main focus is on synergy tracking as a support function of the synergy management. An emphasis is on the analysis of realization efforts that need to be done by the management during the PMI. To provide a solution and ease the aforementioned issues of synergy realization, a synergy tracking tool, which serves as an effective support instrument during the PMI is developed.

M&A have been an established strategic option of business development for a long time. Consequently, managers of acquisitive businesses should have experience to manage these processes appropriately. Nonetheless, often they are not able to deliver synergies to the projected extent and do not achieve an M&A success. This can have several reasons. The three most mentioned synergy pitfalls are addressed in the following. Synergy potentials tend to be overestimated. This is often the result of estimated synergy values by the management. Often manager fail to analyze synergy potentials in detail and do not consider their characteristics appropriately. Factors, such as the realization probability and the duration of synergies are often neglected. Moreover, synergies are often planned top-down by the management which often leads to unrealistic assumptions that cannot be fulfilled by the people in charge.. Another reason for a poor synergy realization effort is bad integration management. Common mistakes in this regard are insufficient project planning or an excessive pace of integration which can lead to dissatisfaction within the workforce and evoke employee resistance. These dysergies and other integration costs are often neglected and hamper the synergy realization in eventual stages of the M&A process.

3.4, The Connection between Synergies and the Price Premium in M&A:

One of the most important tasks within M&A transactions is the valuation of the target company. The projected deal value of an M&A transaction is a crucial factor which determines whether external growth compared to other strategic options presents the most beneficial alternative in order to achieve strategic goals, such as the increase of the company value.

In M&A transactions it has to be differentiated between the calculated company value and the final deal value. The reason for this deviation is because of the transaction partners and their different interests in the transaction. The vendor aims to get the maximum price for his/her company while the acquirer tries to achieve a price discount by applying risk surcharges and negotiating a low price premium to benefit from the transaction. Moreover, opinions about the allocation of synergies differ between the transaction parties. This means synergies are seen to be paid by the acquirer, whereby the acquirer expects to participate in their realization without paying for them. Regarding to this it is said that cost synergies, whose realization depends not on a particular acquirer (universal synergy effects), should generally be part of the price premium and should be paid by the acquirer. Whereas synergies, which can only be realized by a small group of companies, should only be calculated in the acquirer`s subjective value of the acquisition target and should thereby create a real synergy potential (real synergy effects). Nevertheless, the final deal value is always an outcome of a market process in which different expectations are matched through price negotiations. Therefore factors, such as negotiation power and negotiation skills play a decisive role. Generally, a common value in an M&A transaction does not exist since it always depends on which party of interest the respective value is calculated.

In M&A Transactions, synergies are often the most influential value drivers. The synergy value has at least to cover the price premium in order to avoid value destruction. The higher the price premium, the more synergies have to be realized by the acquirer in order to obtain a positive Net Present Value (NPV). Consequently, the acquirer`s economic break-even in which the risk-adjusted price premium is just compensated by the transaction can be determined as follows:

It should be noted, that the price premium equals the difference between the deal value and the Stand-alone value. Hence, the break-even formula can be simplified as:

Thus, it appears that a positive NPV can only be achieved when the net synergy effects exceed the price premium paid for the acquisition target. This highlights once more the importance of an effective synergy management during the entire M&A process and stresses the risks of value destructive M&A transactions as a result of overestimated synergy potentials.

4. Synergy Management and Synergy Tracking in the M&A Process:

Synergies as described in the previous chapter are regularly dominant factors in deal values of M&A transactions. Often strategic decisions, such as increasing the company value through external growth, depend on attainable synergy potentials. However, synergies are not realized by themselves. Hence, it is necessary to conduct an effective synergy management in order to achieve the defined goals.

Synergy management within M&A projects has to overcome problems relating synergy realization which are often caused by complex implementation proposals by the top management or insufficient planning of synergy potentials in previous stages of the M&A transaction. As earlier mentioned, it is often led by the top management via top-down decisions. However; it is increasingly recommended to integrate employees working in the departments where synergies have to be created. The synergy management has three core elements which are the identification, quantification, and the ultimate realization of synergy potentials. It is assisted by the synergy tracking which can be seen as a support function of the synergy management. Synergy tracking embraces two different types which depend on the issues to deal with. On the one hand the strategic synergy tracking which deals mainly with comprehensive topics, such as corporate environment, corporate structure and aspects of corporate culture. On the other hand the operational synergy tracking which is concerned with synergies that generally arise in the departments like cost synergies as a result of optimized business processes. In the following, the emphasis is on the operational synergy tracking where the majority of synergies need to be monitored.