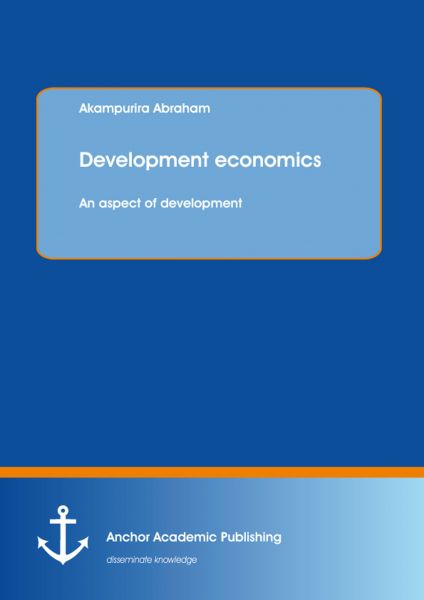 Von Akampurira Abraham
Development economics entail all the aspects of the development process especially meant for the developing countries to overcome the challenges that impede development. This can be through education, education and man power development, restructuring market incentives, incorporating favorable social and political approaches and practices among other factors. Human beings however need streamlined social and economic systems that are able to achieve development through major changes in social structures, national institutions, cultures and attitudes as well as eradication of poverty, reduction of income inequality and acceleration of economic growth. The developing world needs a... alles anzeigen expand_more

Development economics entail all the aspects of the development process especially meant for the developing countries to overcome the challenges that impede development. This can be through education, education and man power development, restructuring market incentives, incorporating favorable social and political approaches and practices among other factors.

Human beings however need streamlined social and economic systems that are able to achieve development through major changes in social structures, national institutions, cultures and attitudes as well as eradication of poverty, reduction of income inequality and acceleration of economic growth. The developing world needs a multi-disciplinary approach and ideas so as to come out of the economic backward situation. Micheal, P describes that because of heterogeneity of the developing world, and the complexity of the development process, development economics must be eclectic, attempting to combine relevant concepts and theories from traditional economics analysis along with new models and broader multi-disciplinary approaches from historical and co temporally development experience of Africa, Asia, and Latin America. Debraj Ray puts it that development economics studies economics of the developing world and has made excellent use of economic theory, econometrics, anthropology, sociology, political science, biology and demography. It needs a lot more dimensional approach to understand it.

The pessimists’ models have not gone unchallenged. Optimists view of population growth have tended to emphasize the critical contributors to economic growth. Such factors such as innovation, efficiency in the use of factors, human as opposed to physical capital and technological change in contrast to the neoclassical emphasis on the critical role of physical capital formation.

Optimists argue that a growing population is a net contributor of economic growth for 2 principle reasons.

Because of a large population brings economies of large scale of population and consumption.

Because population pressure and the scale economies. Population growth are likely to encourage technological innovations and organizational and institutional change particularly in agriculture.

In addition optimists argue that a growing population can stimulate demand and thus reduce investment risk and permits constant improvement of the labor force with better trained workers.

In a classical period Adam Smith involved scale and resultant induced innovation not only to explain economic growth itself but also as arguments for a positive effect of population growth on economic growth. He noted that growing population by widening the market and fostering creativity and innovation facilities and division of labor leading to higher productivity.

Later Marshal also emphasized economies of scale and innovation; noting that while the part which nature plays in production shows a tendency to diminishing returns, a part which man plays shows a tendency to increasing returns. Economies arise out of increased knowledge, greater specialization, better communication and organization changes all associated with increasing scale of production which might result from population growth.

In a modern era Kuznets and Hirschman and others have also emphasized the potential contribution of a growing population, scale economies and to innovation. But there has been limited effort to test the expected effects empirically and that effort has focused solely on the scale effect.

Glover and Simon report that a strongly positive elasticity of roads per unit area with respect to population density in a cross national analysis.

The most effective argument that population may encourage innovation has been made by Boserup (1981) for the agricultural sector. She suggests that increasing population densities induces a shift to a more labor intensive farming system. A shift from a long fallow to a more frequent cropping confronts farmers with a new innovation possibilities. A shift initially requires greater labor input which results in diminishing returns to labor. It will not occur unless rising population pressure necessitates it. Once such shifts occur the use of new tools and techniques permits large increases in productivity. On the other hand there are only historical but also co temporally examples that appear to refute Boserup argument. There are cases in the 19th century like China, Bangladesh and parts of Africa in the last 2 decades in which population growth has probably contributed to declining returns. Outside agriculture it is difficult to show that population pressure rather than other factors has been a major impediment to innovation.

In these 2 models surplus labor in agricultural sector is absorbed in the manufacturing economy. Savings and thus capital grow faster than population and technological change in dynamic manufacturing sector offsets the combining effects of research and development in agriculture and population growth.

All other things the same, the transfer of labor in main sector occurs more rapidly and the share of labor in manufacturing thus grow more rapidly the slower the growth of the population. Slower population growth thus speeds up the elimination of dualism that is a hindrance to economic growth.

Samuelson ignored dependent children in effect assuming they cause no cost to the parents nor to the economy external to the household. In fact higher population growth that results from higher fertility will increase the proportion of children in a population and not increase labor supply for about 15 years. To the extent children consume more than they produce. Their existence must reduce the consumption or saving of workers or retirees.

In the tradition wholly different from the above analytic and deductive models Coale and Hoover (1958) developed a model highlighting the fact that children are costly and that higher fertility increases the proportion of children in the population. They built into their stimulation model of the economics of India the assumption that savings/ capital and thus investment /capital fall in proportion of non working dependants as the economy rises.

The author is a Ugandan working in the Ministry of education as a deputy head teacher at Kigezi High School. He holds a doctorate degree in Development Studies, a Master Degree in Educational management and a Bachelor Degree in Economics (ECON 3.1.1).