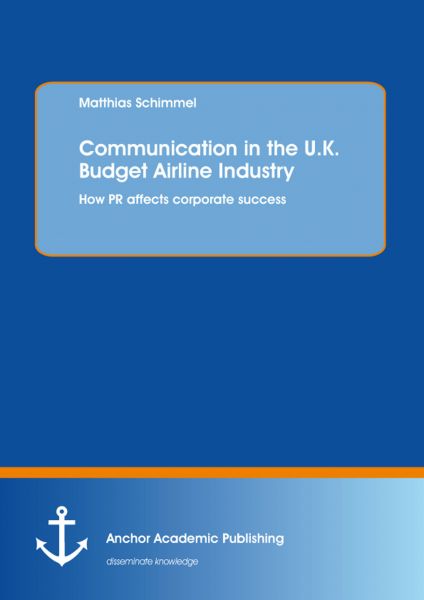 Von Matthias Schimmel
The main purpose of this study is to investigate how Public Relations are currently used as a communication tool within the UK budget airline industry, and how the student segment in the UK corresponds to these measures. To gain a holistic understanding of the topic, facts on the UK air transport market are introduced briefly, with a special regard to the two leading budget airlines, Ryanair and EasyJet. Furthermore, the importance of PR for the airline industry is assessed by the conducted field research. Text Sample: Chapter 3.2, Research Method: Among the wide range of research methods used, only two can be mainly identified in the literature, namely the quantitative and... alles anzeigen expand_more

The main purpose of this study is to investigate how Public Relations are currently used as a communication tool within the UK budget airline industry, and how the student segment in the UK corresponds to these measures. To gain a holistic understanding of the topic, facts on the UK air transport market are introduced briefly, with a special regard to the two leading budget airlines, Ryanair and EasyJet. Furthermore, the importance of PR for the airline industry is assessed by the conducted field research.

Among the wide range of research methods used, only two can be mainly identified in the literature, namely the quantitative and qualitative approaches (Creswell, 2009). The research for this paper is following the quantitative method. Based on positivist and neopositivist thought, quantitative research is known to yield trustworthy results. In addition, it is said (Hoy, 2009) that quantitative methods are more accurate than the qualitative ones, as they are more controlled and omit factors that may negatively influence the research results. They are based on logical reasoning and statistics. One of the major reasons for using the quantitative approach is the use of scientific procedures in order to generate findings. By taking these procedures as a guideline, the author will be able to gather data corresponding to the research aims and hypotheses of this paper, in an accurate and non-biased manner (Vogt, 2007).

Hussey and Hussey (1997) mention that the quantitative approach would be relatively less time consuming and that it is less expensive to collect the required data, which displays core advantages of the method. To sum up the above, the research for this paper will follow the quantitative approach, which allows the author to gather a vast amount of data in order to increase the chances of generalisation and drawing conclusions. However, no research method is flawless and technical problems as well as demand persistence may appear during the research process (Cooper and Schindler, 2006). The process of measurement may be criticised as well, as it can be argued that it has a false meaning of precision and accuracy. Bryman and Bell (2007) also believe, that -depending on the questionnaire and the set of actions- the link between the research and everyday life might be comparably limited.

Quantitative and qualitative methods are not the only approaches that may be discovered in the literature. Another widely recognized method is the case study approach, which may be used to assess a specific phenomenon (Yin, 2009; Swanborn, 2010), to generate findings and draw questions for future research projects (Saunders et al., 2009). However, Bryman and Bell (2007) argue that this approach may show a lack of external validity and generalizability of findings. By evaluating the advantages and disadvantages of the different approaches with regard to the research aims of this paper, the author was led to the decision that the quantitative approach seems to be most applicative to generate valuable outcomes.

As shown previously, several methods or strategies for data collection exist. The wide range of data collection tools consists of surveys, interviews, experimentation, case studies, diary methods and observation (Bryman and Bell, 2007, Cooper and Schindler, 2006; Saunders et al., 2009). This study follows the deductive approach and uses an online survey as the data collection tool, which is one of the most applied ways to capture data when conducting research. To collect the data, a self-administered online questionnaire was designed with a mix of list questions, category questions and six-point Likert-scales. The latter were used as semantic differential rating scales. The background to using six-point scales was linked to the preference that respondents choose between positive or negative ratings and may not be neutral as when using a five-point scale.

The author used the professional tool of www.onlineumfragen.com to conduct the research. By using a professional tool, it was ensured that all questions were easy to read, colour and font sizes were appropriate and that the format was comfortable to read (Saunders et al., 2009). The author chose a warm-pastel yellow as secondary colour to the white background, as this tends to generate slightly more responses than cool colours (Edwards et al., 2002). The online tool is designed to keep the participant focused and active, as only one question is shown at a time. In having to save each question after giving the answer, data losses are prevented in case the participant aborts the survey in the middle.

The questions themselves were created to be unambiguous and understandable in a clear manner, so that respondents may understand them completely. Another advantage of an online survey is that respondents have as much time as they need and are able to answer the questionnaire in their comfortable home environment. They are able to link and complete it according to their personal schedule (Bryman and Bell, 2007). In order to minimize possible disadvantages of the method, several actions were taken. First, if there was any problem with a respondent understanding a question, the author could be contacted by E-Mail via an allocated button during every stage of the survey. In addition, a cover letter (Appendix 2.) that explained the aims of the study and ensured the anonymity of the participant was attached to the survey.

Research methods literature points out the importance and essentiality of piloting the research tool before the actual data collection process. Bell (2005) points out that the researcher may gain security about the success of the tool by piloting it. Such a pre-test could lead to improvement of the questionnaire, ensuring that respondents may easily answer the questions without having queries (Saunders et al., 2009; Allen et al., 2008). Bryman and Bell (2007) state that the individuals testing the survey should not be members of the sample that would be employed in the full study, as it would affect the representativeness of any subsequent sample. In accordance, the questionnaire had been tested among ten non-Edinburgh Napier University students. The piloting resulted in some minor changes in the survey wording through responses and comments of the pre-test participants. Furthermore, one question had been left out. The author timed the participants, ensuring that the questionnaire could be completed in less than five minutes, which is a crucial factor to obtaining a sufficient number of completes. After this test, the author was sure that the instructions were suitable (Saunders et al., 2009), that the design of the questionnaire was beneficial (Iarossi, 2006) and that the wording was correct and clear (Biemer and Lyberg, 2003).

Matthias Schimmel was born in Worms, Germany in 1983. After completing his Bachelor’s degree in “International Business” with the ESB Business School in Reutlingen, Germany, he took the opportunity to do a double-degree Master’s programme with Edinburgh Napier University and IPAG, Nice in the field of “International Marketing with Tourism & Events”. During his studies, he had the chance to live and work in Mexico, Spain, France and Scotland. The competencies gained throughout his studies and international experience influenced and benefited his scientific work.