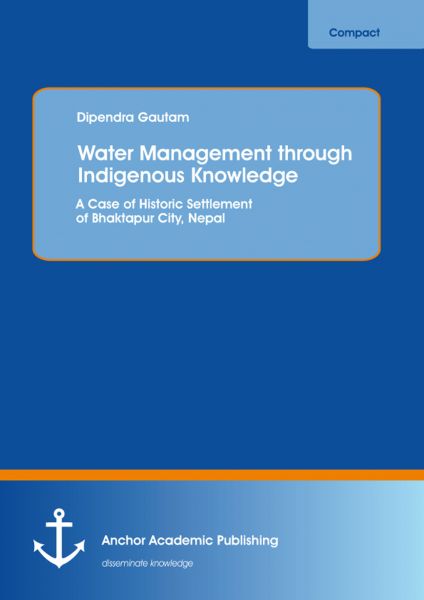 Von Dipendra Gautam
Techno-Anthropological approach has been formulated in researching a traditional settlement of Bhaktapur City, Nepal. The practices of indigenous people have been analyzed by juxtaposing the science along with the indigenous technology. It has been significantly concluded that, the impetus behind the city sustainability is primarily the indigenous knowledge and sometimes this knowledge is overwhelming to even the modern scientific aspects too. Indigenous technology of water management in the historic city of Bhaktapur has been also found to be significant not only in terms of supply rather in terms of quality of water too. The reusability of water resources has given an excellent... alles anzeigen expand_more

Techno-Anthropological approach has been formulated in researching a traditional settlement of Bhaktapur City, Nepal. The practices of indigenous people have been analyzed by juxtaposing the science along with the indigenous technology. It has been significantly concluded that, the impetus behind the city sustainability is primarily the indigenous knowledge and sometimes this knowledge is overwhelming to even the modern scientific aspects too. Indigenous technology of water management in the historic city of Bhaktapur has been also found to be significant not only in terms of supply rather in terms of quality of water too. The reusability of water resources has given an excellent paradigm even to the modern approaches too. The lifestyle in terms of culture and religion has been associated with water for this city, and water management is also facilitated through cultural practices and religious establishments. A city regarded as ‘City of Devotees’ has disseminated a remarkable approach for the water management by keeping aside the modern scientific approaches. The city was established in the 13th century and practices are continuously adopted since then as indigenous practices through unrelenting trial and error, the indigenous technology of water management has been found to be rational hence revitalization of some components might be more energy efficient and economic for present day water scarcity solution in the city.

In order to accommodate the spatial concept of heterotopia to Carter’ s work I cast a glance to the zone between eu-topia, the ‘place of good’, and ou-topia, the ‘non-place’, and to the resulting neologism utopia, which combines both Greek notions in Thomas Moore’s (1516) good place, impossible to reach but in our imagination. Utopia leads the way to a better place, yet it only exists as a socially constructed desire. It points to possibilities beyond our reach, to a horizon that escapes us, an ever elusive border. Whereas utopia is an imaginary construction, heterotopia constitutes the uncertain local play of social ordering, operating in reality (Hetherington, 1998), a proper shelter for hybrids and paradoxes.

Angela Carter’s work is a world in itself, coherent from the inside as far as themes and voices are concerned, puzzling from the outside because of the difficulty one encounters when trying to assign it to a philosophical or literary current. It is rooted in the reality of the writer’s times, questioning cultural constructs and answering back to myth, fairy-tale, history and anything taken for granted. It draws on a variety of sources to state a point, mixing registers of language, media, literary criticism and politics. I see her works best characterised by Foucault’s (1970: XVIII) words:

‘There is a worse kind of disorder[…], the linking together of things that are inappropriate; I mean the disorder in which fragments of a large number of possible worlds glitter separately[…]without law or geometry…in such a state, thins are ‘laid’, ‘placed’, ‘arranged’ in sites so very different from one another that it is impossible to find a place of residence for them, to define a common locus beneath them all’. (qtd. in McHale, 1987:44)

In order to access Angela Carter’s work I asked myself the following question: where does everything take place? Can the organisation of space provide any access doors for the interpretation of the novels? Brian McHale (1987:45) remarks that postmodern novels no longer have a ‘perceiving subject’ around whom space is organised, and he identifies strategies for what is more a deconstruction of space, than its construction. My analysis focuses on the spaces that host the world of Angela Carter’s novels. I will resort to the strategies of superimposition, juxtaposition, interpolation and misattribution mentioned by McHale, and I will unveil the layers of some heterotopian spaces in Angela Carter’s following works in particular - The Magic Toyshop (1967), The Infernal Desire Machines of Doctor Hoffman (1972), The Passion of New Eve (1977), Nights at the Circus (1984), Wise Children (1991), ‘The Erl-King’, ‘The Lady of the House of Love’ (1996) - although there are passing references to other short stories and her philosophical and journalistic writings.

2.1. Dismantling Catacombs and the forest, the desert, the city in 2.2. Mazes of the Outside, and show the way they are disrupted through the above mentioned techniques, leading to the formation of heterotopia.

Angela Carter’s work is a ‘bricolage’, she explains, assembled from ‘a great scrap-yard’ of references to ancient European folklore, eighteen-century fictional devices and nineteenth-century discourses; fundamentally, from ‘all the elements which are available […] to do with the margins of the imaginative life, which is in fact what gives reality to our own experience, and in which we measure our own reality’ (Haffenden, 1985:92).

I approach heterotopia in her work in close connection to Norman Holland’s (1973:151) ‘potential space’: ‘The most sophisticated cultural experiences go on in a space which is neither inner psychic reality… . they go on in a ‘potential space’ which both joins and separates the individual and the person or thing he thinks about’.

This space is built up from the relics of mythological places that no longer need to be produced, the wonderlands of medieval romance and fairy-tales. Carter then re-arranges them, re-interprets them to suit her subversive intentions.

Before turning to the particular heterotopian spaces I have identified, I should stress once more the importance of the term ‘liminal space’ in defining ambiguity in contemporary discourse. The French anthropologist Arnold van Gennep (1960) brought the word limin (Lat. ‘threshold’) to the attention of the social sciences, opening a space, the liminal space, for future interpretations in the literary discourse. After studying transition rites (marriage, death, puberty, etc.) in primitive societies, he divided transition rituals into three stages, with the middle one as both essential and delicate: rituals of separation (preliminal), rituals of margin (liminal), and rituals of aggregation (postliminal).

It was van Gennep’s (1960) attention to the liminal process of transition that caught American anthropologist Victor Turner’s (1974, 1982) interest and led him to publish his work popularizing van Gennep’s recognition of the symbolic nature of transition rites, especially the middle phase situated in liminal space/time. It is through this work that liminal space has come to mean a place of ‘in between the margins’ in various contexts. Consequently, the term liminal space was created by anthropologists to describe the time and place when/where people went to perform their initiation rites. Here, outside the bounds of their daily cultural conventions, they participated in difficult rituals. When they returned to their communities, they were considered to have undergone a transformation and become something different.

In the postmodern world, as boundaries become increasingly blurred, we all sometimes live on the margins. On entering enter liminal space and time, what we have known is left behind and we face the unknown that lies ahead. In recent years liminal space has turned into a cross-disciplinary trope that denotes a chaotic place of severe ordeal, outside the norms of one’s culture. The space no longer needs to be contained by ritual, we do not necessarily go there voluntarily, and often we do not return to our communities after a visit. Cultural theorists (Bhabha, 1994) have referred to liminal space as ‘hybrid’ and speak of border areas where populations mix and where people in societies, who are of mixed race and hold ‘cross-border’ sensibilities, dwell. Social theorists have called liminal space the ‘badlands,’ ‘heterotopia,’ and ‘paradoxical’ (Hetherington, 1997) and speak of populations outside a city, or travelling carnivals within whose boundaries the breaking of norms is tolerated. Some philosophers have described this space as ‘smooth’ and ‘nomadic’ (Deleuze & Guattari, 1987), running through the creases of a community in a ‘rhizoidic’ fashion, ready to erupt into a sudden riot, where the rules of normality are defied. Richard Schechner (1988:172) described theatre as a ‘reflection in liminal time during which the transformation of consciousness occurs’. In theatre space, we suspend disbelief and enter realities other than our own. We move to understandings that are outside the margins of our personal and cultural experience and include a symbolic realm shared by humanity: a way of thinking that is nonlinear and creative, transpersonal and transcultural. In this interior liminal space, consciousness is altered, and we break the normative rules that have limited our perception. It is here that we access images that were previously outside our capacities and we are able to see new patterns in the chaos.).

Dipendra Gautam, a young hectic interdisciplinary researcher is renowned for his unique and up-to-date research topics in Anthropology. A graduate in Anthropology from Tribhuvan University, Nepal has been paying his unrelenting efforts to fulfil the hiatus between academics and research. His due dedication in research has quarried out many facts behind the indigenous people of Nepal; the approaches for his research include techno-anthropological perspectives on indigenous knowledge and practices. He is a pioneer researcher in indigenous knowledge and practices in Nepal. He has accomplished several researches regarding the dimensions of indigenous knowledge systems through extensive field works and regular attachment with the indigenous people. He has even performed several researches in geotechnical earthquake engineering before switching as an anthropological scholar. He is a well recognized scholar in geotechnical earthquake engineering and anthropology. He is well admired for his dedication and seminal interpretations of research findings.