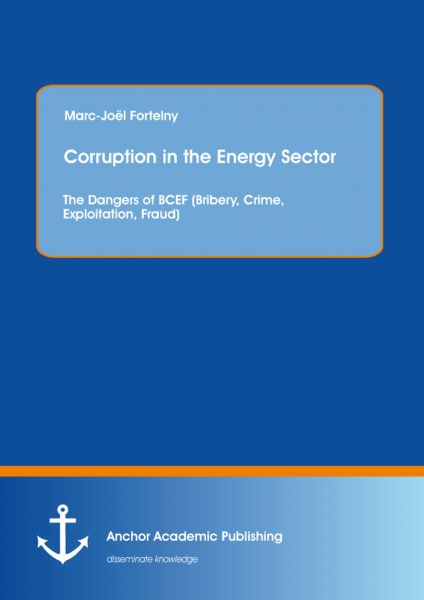 Von Marc-Joel Fortelny
The objective of this study is to depict the energy environment regarding the various sources of energy, the correlation of energy mixes, various trends of transition and mainly corruption of these preceding aspects. An insight of successful and failing counter-measures is also provided.The term corruption in an economic environment is defined as fraud, bribery, immorality and misuse of power, however the actual scope is greater, as the interdependencies of nations, economies and their corresponding interactions create disruptions and discrepancies – especially when lobbying is exploited. Misinformation and the corruption of data are the most difficult research topics, as... alles anzeigen expand_more

The objective of this study is to depict the energy environment regarding the various sources of energy, the correlation of energy mixes, various trends of transition and mainly corruption of these preceding aspects. An insight of successful and failing counter-measures is also provided.The term corruption in an economic environment is defined as fraud, bribery, immorality and misuse of power, however the actual scope is greater, as the interdependencies of nations, economies and their corresponding interactions create disruptions and discrepancies – especially when lobbying is exploited. Misinformation and the corruption of data are the most difficult research topics, as science should not be misused in forcing an opinion with falsifying facts for instance and must not lead to technical provable contradictions.The approach to fight corruption is most likely to be efficient and successful if performed supranational on all public sectors - with adaptations to the energy sector - by all means with high collaborative efforts.

The determination of corruption levels will be expressed and explained in the chapter of ‘The geographical Analysis” via the Corruption Perception Index (CPI).

The organization of ‘transparency” explored and researched the corruption of public sectors worldwide since 1996 while at the same time providing not only the results of their data but the process of collecting data, the weighing methods and the interpretation of this data as well.

As the characteristic of corruption is to deceive and hide its true nature this logically results in difficulties to measure it.

As an example the inflation of potatoes in Central Europe originated in Germany from the three biggest ‘competitors”. In collusion they achieved a price increase of over 40%.

Interestingly, this was the second highest price increase and has been proven to be corrupted while the number one good (onions) seems not to have been discovered or researched. In this case, measuring corruption would be either an estimation based on statistics (similar to a statistic correlated to drug use of professional athletes) or an investigation where in- and outputs have to be recalculated which is a difficult and, depending on the scale and frequency, very costly method.

Summarized, it can be said that statistical data indicates possible corruption and with sufficient data, may even define a more refined area of corruption.

The effects of corruption are wide spread in the energy sector due to various factors. Not only is this sector (disputable) the most important economic base factor but also paradoxically a technology based ‘technology enabler”.

As there are numerous scientific specializations of economics (for instance lean management, sustainability, cost-benefit analysis etc.) corruption itself is not in-between.

Because it is mostly hidden and not/or difficult to measure, depict and express even if there is a hub of research for corruption (transparency.org) a specialization has not been established in the studies of economics resulting in a ‘lack of” research compared to other topics.

Inevitably, the area of effect is indirectly noticeable in every technologically driven village, city or society as there are no ‘substitutes” for energy (compared to food). As a matter of fact, the area of impact is global.

3., Role of Regulation and its Methods:

The most prominent factor of the theory of regulation is the choice and adaptation of a suitable method. While each of these methods have their strengths and weaknesses their correct and persistent implementation is the key to success in creating the most beneficial outcome for the social welfare.

This however will be just a short review of some of the methods as the more problematic part of corruption is the environment, the circumstances, the risks and the opportunities of regulation methods. Often the strict observance of efficient methods is already the first obstacle and/or collapse of the system.

When a firm naturally aims for profit maximization a control board has to be set against an unfavorable position of the consumers/ society. The task of setting an optimal regulation which leaves the financial capabilities and flexibility intact, while at the same time ensuring quality and a ‘fair” price, is comparable to Sisyphos, due its nature of the persistent struggle of enforcing a continuous work.

This type of regulation focuses on maintaining the characteristics and especially the advantages of a competitive market in a monopolistic one. The goal is that firms are allowed to make profits, but only up to a certain rate.

They can manage their input into the company on their own, the resulting output or the price to which they want to sell, as long as the revenues do not exceed the pre-established level of return.

This is a much-criticized model. The first ones that put this under scrutiny were Harvey Averch and Leland Johnson who declared in 1962 that a company trying to maximize its profits under these conditions would fail to minimize its costs.

In contract to an unregulated company, that would strive to use both capital and labor efficiently, a firm conducted under the rate-of-return restriction would employ too much capital at the expense of labor.

This is called the ‘Averch Johnson Effect”.

The choice of the revenue cap over the price cap normally induces a fixed or known quantity.

The limitation of the total revenue received by the firm to a certain sum in a time frame can be circumvented through implicit decisions on the actual rates or return on capital that is in employed with the intention to reach for the price limit edge. As a result it is often indistinctive to the ROR.

As different regulation methods were implemented, that were not always advantageous for the companies’ financial developments, an urge arose to create something that would bring gains.

Marc-Joël Fortelny, M.Sc., was born in 1986 in Vienna. During his school days he soon explored various sciences. Ultimately he chose economics at the University of Vienna as his most favored specialization with a focus on Macroeconomics, Public Utility Management and International Management - the “Master of Science” was completed in 2013. From the age of 16 to 24, several internships and freelancer projects in the energy industry provided the necessary experience for career and research. Therefore the topic of this book is inspired and based upon insights into the energy environment.