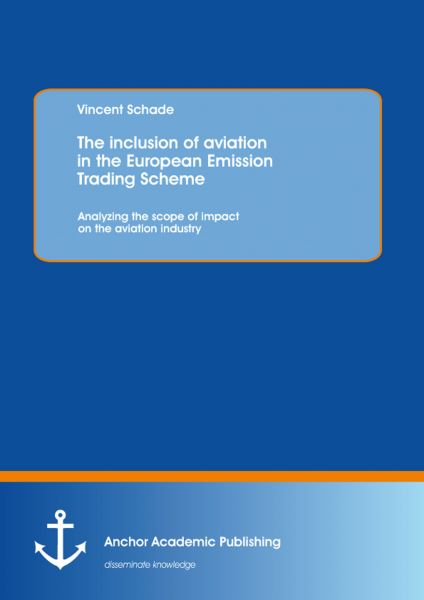 Von Vincent Schade
A significant volume of literature already exists concerning the inclusion of aviation in the EU-ETS. Most of the research laid its focus on specific industry levels such as the individual airline, the aviation industry in general or macroeconomic aspects. In this context, these studies tried to anticipate market reactions triggered by the EU-ETS by analyzing specific issues such as the financial impact on airlines, changes in competitive behavior or implications for the overall industry development. As a consequence, the existing studies took only a limited market view and made assumptions about expected developments in specific fields of the aviation industry. However, at the time... alles anzeigen expand_more

A significant volume of literature already exists concerning the inclusion of aviation in the EU-ETS. Most of the research laid its focus on specific industry levels such as the individual airline, the aviation industry in general or macroeconomic aspects. In this context, these studies tried to anticipate market reactions triggered by the EU-ETS by analyzing specific issues such as the financial impact on airlines, changes in competitive behavior or implications for the overall industry development. As a consequence, the existing studies took only a limited market view and made assumptions about expected developments in specific fields of the aviation industry. However, at the time of writing this thesis, conclusions about the scope of impact could hardly be drawn from existing impact assessments because of the wide range of issues that exceeded the scope of most impact studies. Hence, a broader research approach is needed which takes different analytical perspectives to describe the scope of impact of the EU-ETS and depict potential effects for the aviation industry.

The aviation industry has experienced a dynamic development for a long time. In particular, several liberalization and deregulation measures have turned the aviation market from a formerly highly regulated industry into a truly globalized market. The Airline Deregulation Act which was passed by the US congress in 1978 is frequently mentioned as a pioneer for deregulation which triggered a move towards an open aviation market. The treaty phased out governmental regulations over air fares, flight routes, and barriers to enter the US aviation market for foreign airlines. Following this trend, similar efforts were made throughout the world, e.g. in Canada (1984), New Zealand (1986), Australia (1990) and Europe (1992-1997).

The deregulation instigated a reorganization and strategic realignment of airline business models which was supposed to meet global industry demand more effectively. As a result, the renowned hub-and-spoke system became widely the preferred network configuration since it enabled airlines to increase aircraft utilization while providing a larger route network for passengers. In contrast to the widespread hub-and-spoke model, Southwest Airlines has been a prominent exemption by following its low-cost strategy since its foundation in 1967. Today, Southwest Airlines is seen as the pioneer of the low-cost business model which offers passengers low-fare tickets by cutting down on services as for instance on-board meals, hub connectivity, and baggage transfer handling. Following Southwest Airlines, a large number of low-cost carriers (LCCs) were founded around the globe such as AirTran, jetBlue, Ryanair, and easyJet. Numerous market entries of LCCs intensified market competition and influenced price policies of many airlines. Air fares had to be decreased in order to stay competitive so that many airlines struggled to survive in the market. Also, an unprecedented trend of market consolidation was experienced in the industry.

In recent years, network carriers (NWCs), which traditionally provide passengers with comprehensive customer service, have more and more integrated the competitive low-cost business model in order to participate in this prospering market segment. NWCs have started to acquire existing LCCs (e.g. Lufthansa’s acquisition of Germanwings in 2009), or established own low-cost subsidiaries (e.g. BMI’s spin-off leading to the formation of bmibaby). A similar strategic convergence can be observed in the low-cost segment where LCCs increasingly provide passengers with improved service quality. Because of various market entries in the low-cost segment, competition has picked up and the market has become fairly saturated. As a result, formerly pure differentiators started to offer complementary services on flights. Also new aircraft layouts including business class seating is nowadays apparent. Correspondingly, the term ‘hybrid airlines”, which describes airlines whose strategy combines aspects from traditional and low-cost business models, can often be found in recent scientific literature.

In the course of increasing competition and intensifying price wars, the aviation industry has experienced a huge shift towards inter-organizational collaboration. This becomes evident in the fact that a large number of airlines have entered strategic alliances during the past decade. Today, members of the three airline alliances, namely Star Alliance, oneworld, and Sky Team, capture around 80% of the total market share. The trend towards the creation of alliance constellations can be seen as a response to increasing market dynamics caused by previous deregulation of the global aviation sector. In order to counter rising market volatility, lower uncertainty, and reduce reaction time for competitive moves, leading airlines engaged in strategic alliances, and thereby decreased their own vulnerability to unexpected market developments. Airline alliances often show a high degree of integration with alliance partners, including route coordination, revenue sharing, joint pricing, and marketing.

The aviation industry encompasses several market participants. Analyzing the value chain reveals major market players, such as aircraft manufacturers, airlines, ground handlers, airport operators, and air traffic control (ATC), that contribute to the air transportation service. Given the complexity of the aviation industry this thesis limits its scope to the airline market. In the following, traditional types of airlines including their traditional business models are described.

NWCs are characterized by a large route network which is operated by a hub-and-spoke system to serve a wide range of destinations. As to date, NWCs constitute the leading type of airline capturing the largest market share in the aviation industry. Within a hub-and-spoke network, airports at central locations (hubs) are strategically vital in order to collect traffic through so called feeder flights from various origins (spokes). In this way, passengers are accumulated at central locations so that larger airplanes can be used for long-haul flights to transfer passengers to the respective destinations. In order to operate hub-and-spoke networks, NWCs are required to keep diverse fleet compositions consisting of various types of aircraft to operate short- and long-haul flights. Typically, airlines benefit from this network configuration through scale effects such as network extensions, increased utilization of airplanes, and a more efficient use of ground staff and equipment. Moreover, NWCs are distinguished by the comprehensive customer service. In this regard, NWCs generally offer different passenger classes, including economy, business, and first class. These passenger classes provide different service levels as for instance on-board service, in-flight entertainment, ticketing service, and passenger lounges at airports. Consequently, air fares are regularly in the upper price range claiming a premium price whereas most profits are generated from business- and long-haul travel.

weniger anzeigen expand_less
Weiterführende Links zu "The inclusion of aviation in the European Emission Trading Scheme: Analyzing the scope of impact on"