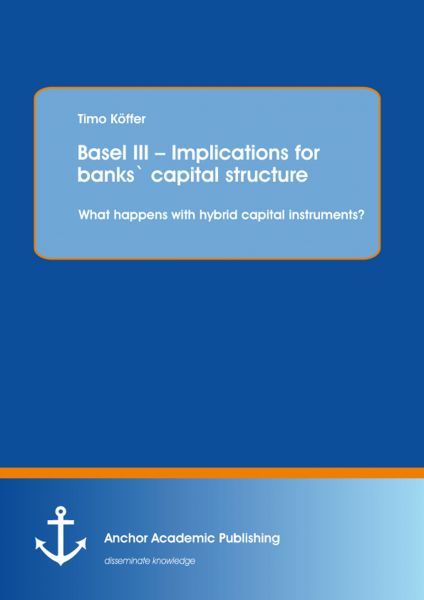 Von Timo Köffer
This book attempts to answer the question of how CoCos differ from convertible bonds, and how these instruments are suitable for contributing as core capital under Basel III. The place ability of CoCos and the challenges resulting from their use are discussed in this book. Overall a comprehensive picture of the impacts resulting from the new capital definitions will be created. The Background to the introduction of Basel III is described at the beginning of the book, in addition to a presentation of the Basel III document and the new capital definitions. To create a kind of basic understanding of the functioning of convertible bonds and CoCos, hybrid capital will then be explained.... alles anzeigen expand_more

This book attempts to answer the question of how CoCos differ from convertible bonds, and how these instruments are suitable for contributing as core capital under Basel III. The place ability of CoCos and the challenges resulting from their use are discussed in this book. Overall a comprehensive picture of the impacts resulting from the new capital definitions will be created. The Background to the introduction of Basel III is described at the beginning of the book, in addition to a presentation of the Basel III document and the new capital definitions. To create a kind of basic understanding of the functioning of convertible bonds and CoCos, hybrid capital will then be explained. In the following part of the book the design options of CoCos and different interests of investor groups are shown. Then the Commerzbank AG is analyzed by means of an analysis of how the capital components changed in Basel II through to Basel III over the last two years. The effect of Basel III on hybrid capital will be illustrated with a practical example. At the end of the book follows a short conclusion regarding the potential impact of Basel III on hybrid capital and the new capital instrument CoCos.

Hybrid capital is used as a term for various financial instruments that cannot be directly attributed to equity or debt. These financial instruments occupy an intermediate position, with which companies can close funding gaps. Hybrid capital instruments can be flexibly designed and equipped with different characteristics. In their liability they are subordinated to other creditors, but primarily to equity investors. As risk compensation a higher dividend is granted compared to conventional debt. Moreover, hybrid capital usually involves an expiration date.

In accordance with the requirements of Basel II hybrid capital was attributed to the regulatory capital and improved the capital ratio. Some benefits are tax incentives and lower payments in comparison to equities. This means lower costs for the issuers. So the capital base under Basel II was strengthened through hybrid capital and the banks had increasing scope for new lending to the economy.

3.1, The market for hybrid capital:

The typical silent partnership is basically characterized by the fact that the investor has no power to be represented or to involve themselves. He or she has only a financial function and will share in the profits of the company. A loss-sharing can be agreed. The atypical silent partner is also involved in the assets and the hidden reserves. The silent partnership is a popular hybrid capital instrument because it is very flexible for the issuer and can be tailored to the investor. For the silent investor it is often an advantage that others will not get any knowledge about his or her participation in the company. The participation is undertaken only internally and the investor can partake of the profits of the company.

With the purchase of a participatory note the investor acquires a legal entitlement to the profits or the proceeds of liquidation. It is also possible to agree a fixed remuneration component, or the participation in the loss can be agreed in the terms of the notes. The owner of the participatory note has almost no opportunity to influence the decisions of the issuing company. This allows the issuer to obtain near-equity volume without involvement through the investor. There is no statutory regulation for participatory notes in Germany, so their free design is possible.

Convertible- and warrant bonds are the hybrid instruments that combine debt- and equity characteristics. It originated and was used by investors the mid- 19th century for the first time. Investors in convertible- and warrant bonds have the right to purchase a specified number of shares of the issuer. This conversion happens in a specified period with predetermined exchange ratios. The number of shares which can be purchased is the "conversion rate". Through the option to convert the bond to stock, a convertible bond has typically a lower interest payment than a similar non-convertible debt. A convertible bond is a contractual debt obligation to distribute payments in cash, or in another financial assets. Because the right to convert the bond into shares of the issuer is included, a corresponding decision for the creation of conditional capital is required first by the general shareholder meeting of the company. The issuing company has a wide latitude in designing this type of hybrid capital. This mainly concerns the nature and amount of compensation. For the investor it is interesting to invest, because he or she acquires in addition to the bond the right to be a shareholder of the company. If the investor does not use this right, he or she receives interest payments as well as the nominal value of the bond at the end of the term. If he or she converts their bond into shares, they do no longer have a claim on interest- and principal payments. A rational investor would only make use of their right to convert if the conversion value would exceed the straight value. The key benefit of a convertible bond for the issuer, is a reduced cash interest payment.

The value of this type of bond is determined by the level of interest rates, the volatility of interest rates, the amount and the changes in the credit risk of the issuer, the coupon amount, the maturity, the dividend yield, the conversion rate and a possible mandatory conversion right. Overall it is a complex function with several factors and a lot of design possibilities which can be adapted to the needs of the issuer.

There are a lot of different financial instruments that belong to the convertible capital class:

- Conventional convertible bond: A fixed income security that gives the holder the right, in the conversion period, to exchange it into shares in a predetermined ratio.

- Exchangeable bonds: A bond that gives the investor the right to convert the bond at any time into a fixed and given number of shares. In contrast to the convertible bond, the issuer of an exchangeable bond is not the company that issues the underlying shares, but typically one of the major shareholders.

- Warrant bonds: Warrant bonds are bonds with option rights. Investors have the right to buy shares of the bond issuer at a predetermined price. They differ from convertible bonds in that the bond still exists after the option right has been traded. Repayment at the end of the duration and interest payment is still the same as with conventional bonds, but the option is separated from the bond. That warrant can be traded separately on the markets.

Contingent convertible bond: A convertible bond which automatically converts into a previous amount of shares when a pre-set trigger is reached within the duration of the bond.

Timo Köffer was born in 1990 in Kamp-Lintfort (Germany). After he had successfully completed his training as a banker clerk, he worked at various job positions in a large German bank. In addition, he successfully completed an evening study course in business administration. The actually regulatory changes in the banking market, motivated him to wrote this book.