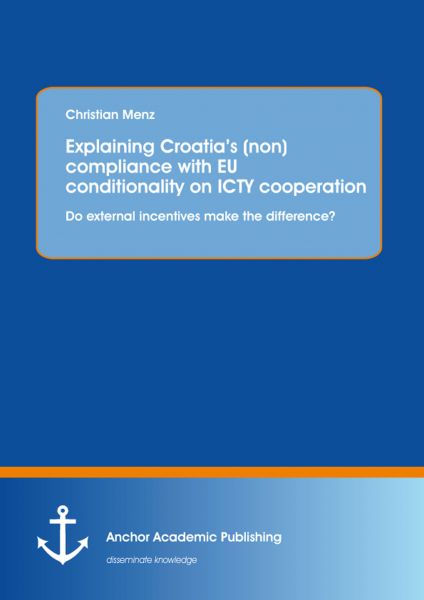 Von Christian Menz
For the positive experience with tying progress in negotiations with progress in reform in Central and Eastern Europe, the European Union made its membership offer to the Western Balkans countries conditional on specific democratic principles, most notably (full) cooperation with the International Criminal Tribunal for the former Yugoslavia (ICTY). Yet, although EU membership is regarded as highly attractive both for political elites and the general public in the region, the erratic record of compliance with ICTY-related EU conditionality in Croatia since 2000 raises questions about the EU’s ability to provide for ‘rule transfer’ and ‘norm diffusion’ in... alles anzeigen expand_more

For the positive experience with tying progress in negotiations with progress in reform in Central and Eastern Europe, the European Union made its membership offer to the Western Balkans countries conditional on specific democratic principles, most notably (full) cooperation with the International Criminal Tribunal for the former Yugoslavia (ICTY). Yet, although EU membership is regarded as highly attractive both for political elites and the general public in the region, the erratic record of compliance with ICTY-related EU conditionality in Croatia since 2000 raises questions about the EU’s ability to provide for ‘rule transfer’ and ‘norm diffusion’ in the current enlargement round and poses a puzzle to scholars of international relations and EU enlargement alike. My findings suggest that EU conditionality was rather inconsistently applied toward Croatia. Two main conclusions can be made from this. First, individual member states have gained in influence over enlargement policy that leads to a more politicized use of the conditionality tool undermining its effectiveness. Second, it illustrates the need to place politics in time and to go beyond purely rationalist explanations.

In the subsequent paragraph the main empirical findings on (non)compliance with EU conditionality will be discussed. In this way, potential gaps in research and starting points for future studies are identified. Taking into account that the effectiveness of EU conditionality may differ across different issue areas and stages of the enlargement process (cf. Sedelmeier 2006: 6), it turns out to be useful to distinguish between ‘democratic conditionality’ and ‘acquis conditionality’.

Concerning democratic conditionality, domestic adoption costs and credible threats (exclusion, suspension of negotiations) and promises (association, membership) have been identified as the key variables for rule adoption (cf. Morlino/Magen 2009b: 253; Schimmelfennig/Sedelmeier 2005c: 211; Youngs 2009). By contrast, the inconsistent use of conditionality and the apparent lack of a determined timetable for future accession may decrease both incentives and credibility, which seems to have decelerated rule adoption in the WB (cf. Pridham 2007: 459; Sebastian 2008: 5-6; Vachudova 2005: 252). The fact that certain conditions (such as compliance with minority rights and the Dayton Peace Accord, ICTY cooperation) are not part of the acquis may imply a lack of determinacy and legitimacy of EU conditionality. However, at least for the field of minority protection it was shown that it did not matter for compliance whether rules were also binding for EU member states, even though the EU’s demands differed considerably between candidate states (e.g. Kelley 2004a; Schimmelfennig et al. 2003: 515; Schimmelfennig/Sedelmeier 2005c: 214-215; Schwellnus 2005). Rather it appears that in the case of minority rights the gap in membership legislation could be offset by concrete demands in official EU documentations and the consistent way the member states insisted on full compliance as a precondition for membership (cf. Schimmelfennig 2005a: 119-121; for a more critical assessment see Sasse 2005).

Yet large material and symbolic benefits and high credibility alone do not provide for compliance with democratic conditionality. Rather, one has to take into account domestic adoption costs, too (cf. Ethier 2003: 117; Leeds 1999). In an analysis of the effects of membership incentives on compliance with EU conditionality in East and South East Europe, Schimmelfennig identified the party system as a crucial independent variable for external influence on domestic rule adoption (2005b: 855-857, 2007: 132-135). In an ‘anti-liberal” party constellation adoption costs will be prohibitive, whereas in a ‘mixed” constellation liberal parties adopt democratic rules which raise the costs for subsequent anti-liberal coalitions to reverse course. Regarding ‘liberal” party constellations, Schimmelfennig found that norm compliance depended on the issue area: if it was not contested, conditionality was unnecessary and the external actor could create a ‘virtuous circle” (cf. 2005b: 856, 2007: 133- 134). However, if the norm was contested (e.g. in the case of minority issues in Latvia and Estonia), conditionality had to be applied and, at least in the case of CEE countries, ultimately proved successful (Schimmelfennig 2005b: 835-837, 2007: 133-134).

Similarly, if domestic veto players were confronted with low or negative costs, normative pressure and efficient assistance proved sufficient for rule adoption in ‘low-politics’ areas, e.g. rather technocratic reforms of the judicial system (cf. Morlino/Magen 2009b: 234). On the other hand, given moderate adoption costs, high incentives and credible conditionality proved to be sufficient for the EU to manipulate the target government’s costs-benefits calculations in favor of rule adoption (cf. Schimmelfennig/Sedelmeier 2005c: 222). In autocratic and authoritarian states, however, thorough democratic reforms would imply exorbitant (power) costs to the incumbent regime. Additionally, in more fragile democracies the EU might ‘lock-in’ democratic reforms: in times when reform-friendly liberal democratic forces form the government, EU rules are adopted which leaves subsequent authoritarian or populist governments with a fait accompli and implies extra-costs to revoke reforms (cf. Schimmelfennig/Sedelmeier 2005c: 222; Schimmelfennig 2007: 135). Yet it is contested whether such ‘lock-in’-effects can be fully explained within purely rationalist argumentation, since it may have been due to persuasion or socialization effects that rather authoritarian forces preserved democratic rules and institutions once they reached power(cf. Börzel/Risse 2009: 15-16; Checkel 2005a: 809).

Yet conditionality and external incentives can also work indirectly through the empowerment of domestic ‘change agents’ and the relative weakening of veto-players (cf. Morlino/Magen 2009: 31). Change agents or ‘norm entrepreneurs’, be they state or social actors, direct attention to democratic rules and, as a political strategy, change the way certain norms are perceived and talked about (cf. Finnemore/Sikking 1998: 897-899). This ‘framing’ aims at mobilizing public pressure in order to raise costs of reform-recalcitrant elites and redefines identities and interests of domestic decision-makers and the broader public via processes of persuasion and social learning (Johnson 2006). In order to be successful, however, the public must be perceptive for ideas of democratic change in specific issue areas (or even ready to overthrow the regime) and the government/autocracy must not be sufficiently consolidated to suppress or marginalize democratic opposition (cf. Schimmelfennig/Sedelmeier 2005c: 214).

To promote ist external governance the EU sometimes also delegated command and control as well as consultancy tasks to other international organizations, e.g. to the OSCE in the WB (with regard to the setup of the Stability Pact in 1999). Apart from that, there areb also cases of ‘parallel conditionality” (Schimmelfennig/Sedelmeier 2005b: 15) when the EU’s leverage on domestic rule adoption is enhanced by other external actors, such as the US and NATO in the Balkans (cf. Schimmelfennig 2005: 22 for CEE).

In contrast to political conditions for membership, acquis conditionality does not directly affect the fundamental institutions of political power and therefore does not directly threaten the political survival of the target government. As concerns acquis conditionality, according to the empirical results of Schimmelfennig and Sedelmeier, a credible membership perspective and dependence of accession on (full) compliance with specific rules turned out as the key factors for rule adoption in CEE, whereas adoption costs and veto players mattered only with regard to the timing of rule adoption (cf. 2004: 673, 2005c: 210-211, 226; see also Hofer 2008: 175-180). As soon as aquis conditionality was applied in a certain issue area, formerly ‘patchy and selective” rule adoption has been detected to increase considerably, which is ‘a consistent feature across countries and issue areas” in CEE (Schimmelfennig/Sedelmeier 2005c: 215). As has been found for CEE, once the membership perspective has become credible, the target government apparently rather considered the aggregate benefits of membership than the benefits in particular issue areas in ist cost-benefit-calculations (cf. Schimmelfennig/Sedelmeier 2005c: 215-216). Therefore, Schimmelfennig and Sedelmeier argue that in this case domestic power costs and the domestic veto player structure will rather delay than impede rule adoption while no systematic effect on the likelihood of rule adoption could be identified (cf. 2005c: 216). Another important domestic variable is the institutional and administrative capacity as the government might simply lack the resources to effectively manage and coordinate large bureaucracies or to sufficiently command (and/or socialize) veto-players within the state apparatus which will affect especially rule implementation.

External incentives, however, fall short to explain instances of rule adoption when external incentives were low or absent (cf. Grabbe 2006: 201; Schimmelfennig/Sedelmeier 2005c: 220). Moreover, during the transition, domestic reformers both in the CEE and in the Balkans have been looking for external templates for the modification or invention of domestic rules (cf. Grabbe 2001: 1014). However, little knowledge exists about which factors facilitate or obstruct the internal and/or external diffusion of European ideas: ‘[l]esson-drawing and/or mimicry is probably the least researched area […] with regard to Europeanization” [emphasis in the original] (Börzel/Risse 2009: 13). Incentive-based strategies aim at modifying behavior which makes them effective when it comes to the imposition of institutions and formal adoption of norms. Thereby they help to lock-in domestic reforms. However, mere conditionality policies are unable to cause genuine implementation and internalization of norms (‘real change’) and may even provoke counterproductive effects, when monitoring and the threat to be punished crowd out integrity and intrinsic motivation (cf. Morlino/Magen 2009b: 255; Richter 2009b: 111; Schimmelfennig 2005b: 831). A similar point is made with regard to a possible subsequent slowdown of compliance and implementation or outright reversal of norms once states have gained membership status (cf. Falkner/Treib 2008; Grabbe 2006: 204; Schimmelfennig/Sedelmeier 2004: 676; Treib/Falkner 2008: 165). However, recent findings of enduring compliance among new member states after their accession with both acquis and less formalized EU rules challenge the fundamental role of conditionality for compliance that dominates the rational choice literature (Epstein 2008b; Falkner/Treiber 2008; Pridham 2008; Schimmelfennig/Trauner 2009). Rather, it seems that strategic bargaining mechanisms must be accompanied and complemented by other means of socialization such as shaming and normative suasion to promote domestic change and provide for long-term democratization effects (see Checkel 2001: 563, 2005: 803; Kelley 2004b; Richter 2009b: 97, 106; Schimmelfennig 2003: 281-287).

Christian Menz, born in 1984, holds a Bachelor’s degree in Public Policy and Governance from the University of Passau and an M.A. in Social Policy from the University of Bremen. His academic expertise on EU enlargement, international politics and security policies is backed up by strong practical insight gained through a one-year stay at University of Ljubljana/Slovenia as well as various summer schools in Hungary, Serbia, Poland and Croatia. Besides, he completed several extended internships in anti-corruption, EU politics and regional integration in Latin America, Germany and Bulgaria. In Lent term 2012 he was a visiting student at the London School of Economics and Political Science.