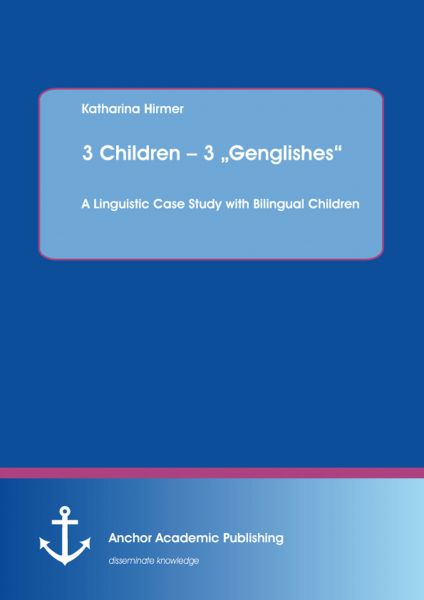 Von Katharina Hirmer
Statements like “Ich kann doch nicht shufflen!” or other language mixings belong to the everyday life of bilingual children. This book deals exactly with this topic and contains a case study about English-German bilinguals having lived in Great Britain and the U.S. and now growing up in Germany. Thereby, the study is based on the current theory of bilingualism. The study was conducted with a family living in Germany whereby the children were 8, 10 and 12 years old. They were studied for 2 weeks in their everyday lives, and the results should be of interest for all kinds of readers who are interested in languages and their acquisition or who are personally involved in... alles anzeigen expand_more

Statements like “Ich kann doch nicht shufflen!” or other language mixings belong to the everyday life of bilingual children. This book deals exactly with this topic and contains a case study about English-German bilinguals having lived in Great Britain and the U.S. and now growing up in Germany. Thereby, the study is based on the current theory of bilingualism. The study was conducted with a family living in Germany whereby the children were 8, 10 and 12 years old. They were studied for 2 weeks in their everyday lives, and the results should be of interest for all kinds of readers who are interested in languages and their acquisition or who are personally involved in bilingualism. In chapter 1, the term ‘bilingualism’ is described briefly, the reasons for the chosen topic are portrayed, and the family of the case study and their special situation is introduced. In the next chapter, a general overview about the theoretical background of bilingualism is given. Important sub items of this chapter are the current status of research, the ways in which bilinguals can be categorized, the ‘one person – one language principle’ and interferences and code-mixing as important components of bilingualism. In chapter 3, the case study itself is presented. Here, the aims, methodology and materials of the study are described. Subsequently, the results of the case study are brought into relation with the underlying linguistic theory. At the end of the book, the findings of the study are summarized, and further, the consequences for the three children’s language acquisition processes are drawn.

As well as the strategies a family uses to raise their children bilingually, interferences and code-mixing/-switching play a very prominent role in BA, especially in a bilingual’s ‘weak’ language. They are important parts of the early language development and should even later not be judged too negatively either by parents or teachers. These ‘problems’ should rather be accepted to a certain degree, since there is the danger of mental overload in a bilingual child, if the claims for correctness in the ‘weak’ language are too high (Kielhöfer/Jonekit, 2002: p.90). Hereafter, different types of interferences and definitions of code-mixing, respectively code-switching will be given.

According to Grosjean (2010: p.68), interferences are ‘deviations from the language being spoken (or written) stemming from the influence of the deactivated languages’ and they belong to bilinguals ‘however hard they try to avoid them’.

Interferences can take place at all levels of a language, i.e. in phonology, at the lexical level and in syntax. Interferences in pronunciation can be just temporal or else persistent, just as interferences on other levels of language. Examples for interferences at the level of phonology are having an accent or just temporarily pronouncing words in the wrong way with consonants or vowels from the respective other language. At the word level, one can instance lexical borrowings, loanshifts or ‘false friends’ or the wrong usage of proverbs and idioms. Moreover, using the wrong prepositions and word order structures belongs to the interferences at the syntax level. I will go into more detail concerning these types of interferences when describing the actual case study in chapter 3 (Grosjean, 2010: pp.70-72).

Concluding this section about interferences, it is important to add that even adult bilinguals still make interference ‘mistakes’ and most of the time they do it unconsciously. Therefore, bilingual children should all the more be allowed to make interference mistakes. If not corrected too much or too enthusiastically, they will then even learn from these ‘mistakes’ by themselves, since situations, where interferences interrupt or hinder communication normally linger in the memory.

Apart from interferences, code-mixing and code-switching are two phenomena one encounters very often when reading about bilingualism. Before actually talking about these two very similar concepts of language mixing, in other words utterances or conversations ‘containing features of both languages’ (Meisel/Köppe, 1995 : p.277), there will be given short definitions of the two terms in order to distinguish them from each other. While code-switching is the bilingual speaker’s ability ‘to select the language according to external factors like the particular interlocutor, the situational context, the topic of conversation etc.’ according to Meisel and Köppe (1995: p.277), code-mixing means that a bilingual speaker violates the rules of one of his/her language when he/she makes mixed utterances. Other authors like Grosjean or Genesee, however, use the two terms interchangeably, as the following definition from Genesee’s book Dual Language Development and Disorders (2008) shows: According to the author, code-mixing ‘is also sometimes referred to as code-switching.’ (Genesee, 2008: p.216). Therefore, in this paper the term code-mixing will be used to refer to both, code-mixing and code-switching. It will not be distinguished between code-mixing containing errors in the actually spoken language while code-switching does not. It will only be referred to the term code-mixing as ‘the use of elements from two languages in the same utterance or […] stretch of conversation’ (Genesee, 2008: p.91).

Often referred to as intersentential and intrasentential, two different kinds of code-mixing can be described. Genesee (2008: p.91) uses slightly different terms for these two phenomena and as there was already reference to this author earlier, it will be stuck to his definitions once again. Therefore, this paper will use the two terms intrautterance and interutterance code-mixing, since people rarely talk in whole sentences (Genesee, 2008: p.91). Intrautterance code-mixing is used ‘when elements occur in the same utterance’, whereas interutterance code-mixing denotes code-mixing occurring ‘in two different utterances in the same conversation’ (Grosjean, 2008: p.91). Code-mixing in general does not only refer to using single words in certain utterances, but also whole phrases, clauses and yet pragmatic patterns can be code-mixed (Genesee, 2008: p.92). There are, of course, the most divergent types of intrautterance and interutterance code-mixings, but I will go more into detail here in the next chapter, when describing the results of the case study. However, the myth mentioned by Grosjean (2010: p.52) that bilinguals code-mix out of pure laziness has to be contradicted very clearly. Even if sometimes code-mixing occurs more often when a bilingual is tired, angry or in another emotional extreme, there are many good reasons for using code-mixing in ‘normal’ situations. Sometimes, it is just easier to say a word or a phrase in the respective other language, or there is a so called ‘lexical gap’ in one language and so this gap is filled with a word of the respective other language (Auer/Wei, 2007: p.23). But if the interlocutor knows both languages well, there is no problem at all (Grosjean, 2010: pp. 53-54).

What remains to be said is that code-mixing is a very natural incident for bilinguals. They sometimes do not even notice by themselves that they have switched between their languages, only when their attention is drawn to it by monolingual friends or family members, as it is with interferences. But before coming back to the different characteristics of bilinguals relating to the three children, the aim, method and materials used for the case study will now be described.

Katharina Hirmer, B.A. was born in Regensburg in 1987. She obtained a bachelor’s degree in English linguistics from the University of Regensburg in 2012. Currently, the author is taking her state exams in English and History to become a teacher at Gymnasium which she will have completed in the summer of 2013. Particularly fascinated by the American culture and language, the author spent a semester abroad at the Murray State University in Kentucky in order to get to know the country and its people. Since the author has acquaintances raising her children bilingually, she came across the fascinating world of multilingualism. After having delved into this topic more deeply for a presentation in a linguistics seminar, she got more and more interested, and finally dedicated this book to the research of bilingualism.